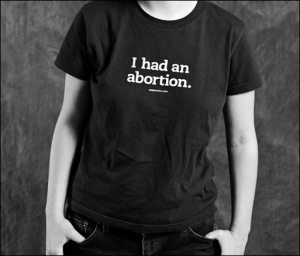 “As of today, I am responsible for 18,617 abortions.”  I’m not sure how she knew. I’m not sure I believed it when she first told me. I had no idea how many abortions a single clinic carries out in a day. But that was the estimate of destruction from one woman working for a few years in one small network of clinics in Georgia.  That job, by her account, nearly destroyed her soul.

From yesterday’s post, we learned that at the very least, abortion is a serious social justice issue in the U.S.  In their locations and marketing, clinics target minorities and poor people.

The world is also full of young women who have made life-changing mistakes and who found a short-term solution in a clinic. I’ve talked to dozens of those women over the years and have discovered a kind of pain that rests uniquely with someone who holds the shame of a secret. That might not be your story, but it is the story of many women who still struggle years or even decades later.

What about those who feel trapped by a recent or maybe not-so-recent choice? How do we best respond as followers of Jesus to someone in a crisis situation, who is wondering how to get out? How do we respond to shame?

Here are a few thoughts on how to respond with grace and truth:

Respond biblically. Psalm 82:3-4 gives us a blueprint for a compassionate response. Defend the weak and the fatherless; uphold the cause of the poor and the oppressed. Rescue the weak and the needy; deliver them from the hand of the wicked. In other words, care for the ones Jesus cares about (both mother and child). I believe what folks want most is not a way out, but a way through. Most people want to know they are not alone. To walk with them through the valley (not around it) is a compassionate and biblical response.

Understand how God uses suffering and redeems mistakes. Because he does. In God’s economy, nothing is wasted. One of our families in church gave birth to a child with significant health issues.  He was in critical care for months in another state and has had multiple surgeries since.  After they arrived home, we visited this little one in the hospital, where he stayed for more months. As I stood on one side of the bed looking at this child — tubes everywhere — his mother said, “I can’t believe God trusted us enough to allow us to care for this one.”  That’s the very spirit of Romans 8:28. “In all things God works for the good of those who love him, who have been called according to his purpose.”

Likewise, God can redeem years the locusts have eaten. He can make good out of our worst when we surrender to it and refuse the voice of shame in our lives.

If you have an opinion, express it with integrity. Paul told the people of Galatia that “the entire law is fulfilled in keeping this one command: ‘Love your neighbor as yourself.’ If you keep on biting and devouring each other, watch out or you will be destroyed by each other” (Galatians 5:14-15). Every time a clinic is bombed or a hate letter is sent, the enemy of God wins a point. Make sure your opinions are biblically based and constructively shared. Voice your concern at sites like manhattandeclaration.org. Give to Care Pregnancy Centers and Christian adoption services. Keep this crisis line number with you: 706-724-3733.  For the sake of the Kingdom, don’t spew hate or negative emotions on Facebook. Let your conversations happen in relationship.

And if you have received or participated in an abortion (as a man or woman), the best thing you could possibly do is this: receive forgiveness and seek healing. It can’t be easy to read these posts if you’ve ever been involved with the choice to have an abortion. It may stir old feelings of guilt or grief.  But remember this:  there is no shame in Christ. The message of Jesus was made for people who make mistakes — even big ones. John says, “If we confess our sins, he is faithful and just and will forgive us our sins and purify us from all unrighteousness” (1 John 1:9-2:1).

Some years ago, after our church hosted a Bible study for those healing from the pain of abortion, I received an email from someone recovering from multiple abortions. She wrote, “Abortion physically kills an unborn child and spiritually kills a mother.  After abortion, a woman is expected to ‘get on with her life’; within the confines of her own shame, guilt, anguish, depression, anger … all prisons …  It’s not over yet, but I’m more equipped than I’ve ever been to pursue my powerful enemies, which were always too strong for me, the enemies that lived right inside my own mind.  God really does stoop down to make us great.  There truly is healing power in the name of Jesus.”