What a tarantula can teach you about resurrection 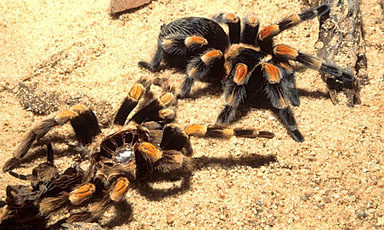 If you’ve never seen a tarantula shed its skin, you need to see it (a link is below; be aware that it isn’t very pretty, so don’t watch it if you are squeamish. Also, I’m not responsible for the music background. It is what it is …).

I first watched this clip after reading some guy’s story about the first time his pet tarantula shed its skin. He thought it was dead, actually. He woke up to find his spider on its back with its legs sticking straight up in the air. “Dead as a doorknob” was a pretty good guess, but it didn’t make sense. After all, he fed his spider frequently. He gave the little guy water. What else does a spider need?

A bit later, the spider’s owner came back to the aquarium to find that the head and main body of the tarantula had popped open like the hatch on a submarine.

And it was pulsing. (This doesn’t bother you, does it?)

That’s when he decided to go online and to find out exactly what was happening. He knew tarantulas shed their skin but he’d never actually seen it before. He thought that spider was dead; now he appeared to be alive again.

What he discovered was that this is the norm for a tarantula on his way to shedding. First, he turns himself on his back, making himself appear dead. The blood leaves the outer layer of skin and pulses through his body, pushing the skin away from him. He crawls out of his old skin just as a person would undress at the end of the day.

Here’s the coolest part. When a tarantula sheds, he sheds every part of his old self … including his fangs.

Do you hear the sermon in that?

Here’s the part I love best. It doesn’t just happen once in a lifetime or even once in a great while. It happens a couple of times a year.

And what happens in nature informs what ought to happen in my spiritual life. Not once in a lifetime, or even once in a great while, but often enough that it becomes a habit for me, I need to take stock of my spiritual life and get rid of anything that doesn’t belong in Him.

This is sanctification: it is continually shedding the old skin and taking hold of the new.

This is what it means to live a resurrection life.