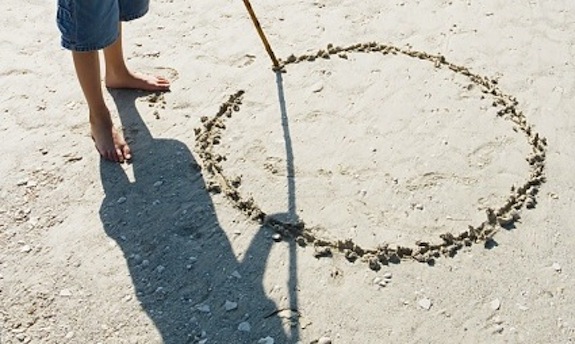 Mark Batterson tells the story of Honi the Circle-Maker.* Honi isn’t a Bible character, but from other writings that include his story (Jerome, for instance), it seems that Honi likely lived within fifty or so years of Jesus.

Honi was an Israelite known for his ability to pray for rain. He visited cities dealing with drought, drew a circle in the sand there, then stood inside that circle and prayed for rain.

Once, the Israelites called on Honi when they hadn’t seen rain in a year. Honi did his usual. He walked to the edge of town, drew a circle in the sand, stood inside it and said, “Lord, I know you have power to bring rain and I know your will is provision. And so, I swear before this great nation that I am not going to move from this circle until you have shown mercy on your children.”

That ends up being a dangerous prayer. Honi was almost killed for that uttering it. People in his day didn’t think a person should talk to God that way.

They might have killed him except that about the time Honi finished his prayer it started to sprinkle. If I’d been this prophet I might have picked up my circle at that point and walked right out of town. After all, I’d proven my approach. Why would I give more to people who would have killed me but for that sprinkle?

But Honi knew God, and because he knew God and God’s power, he wasn’t about to settle for a sprinkling of God’s provision. Tolerable was not the goal.

Hear that: Tolerable is not the goal. Transformation is.

Honi stayed inside his circle, leaned into the power of God and kept praying. “Not for such rain have I prayed, but for rain that fills cisterns, pits and caverns.” With that second prayer, it began to rain like crazy. Torrential rain. Egg-sized raindrops. Damaging rain.

And again, Honi prayed. “Not for such rain have I prayed, but for rain of your favor, blessing, and grace.” And with that prayer, the rain became the kind of sweet, soaking rain that settled in and filled cisterns and souls.

This actually better suits what we know of God. He is omnipotent, which means he has limitless power. A God of love would surely want to share it. A God of limitless power and love is not only capable of more than we can imagine; he also desires to share that power with us in good and life-producing ways.

In the middle of our wrestling, maybe God is asking us to wrestle with the very question of his power. “Is there a limit to my power?” Why would he want us to shoot for anything less than his fullness? And what if our praying is how he compels us to lean in and hang on until his power is revealed?

Batterson says that how we answer that one question determines how we will live and how we will pray.

Is there a limit to my power? The coming of Christ and his defeat of sin and death answer that question boldly. There is no limit to God’s power. Which means that we are free to draw our circles around our biggest issues and stand confidently knowing that whatever the circumstance, our God is able.

Batterson says, “With God, its never an issue of, ‘Can he?’ It is only an issue of, ‘Will he?’ We may not always know if he will, but we know he can.”

*Mark Batterson’s book, The Circle-Maker, is an inspiring short read.