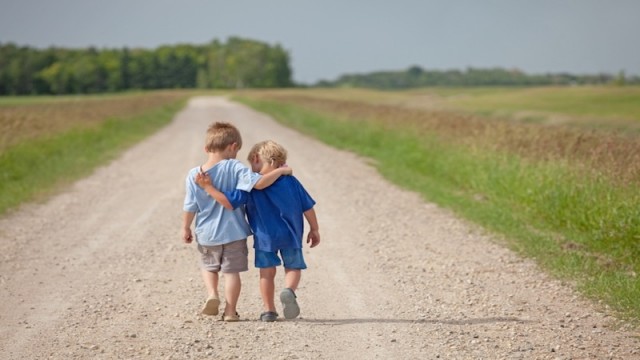 Mephibosheth.  Sound that one out, then imagine yourself with the burden of that name hanging around the neck of your life.

Mephibosheth was Jonathan’s son. David found him when he went looking for a way to make good on a promise he’d made to Jonathan years before. It was a vow to honor Jonathan’s family — any time, any place. One day long into his reign as king, he goes to the palace staff and asks (2 Samuel 9:1), “Is there anyone still left of the house of Saul to whom I can show kindness for Jonathan’s sake?” At the question, someone remembers Mephibosheth.

His name, by the way, means “shameful thing.”

Mephibosheth had bad feet. When he was five years old, a nursemaid dropped him or let him fall and somehow his feet were damaged. So now, here is a boy named Shameful with feet that don’t allow him to play with the other kids or follow in his warrior-father’s footsteps. After his father’s death, they did with him what they often did with kids like him. They sent him off to someone willing to keep him as a servant for the cost of room and board.

So a guy named Shameful who is labeled as Lame gets shipped off to a place called Lo Debar, which means “place of no pasture,” or sometimes, “place of no word.” No word.  No blessing.  No intelligence.  No honor.  This is where Mephibosheth lived.

Then, completely out of the blue, King David sends for him. The Hebrew word used here literally means something like “fetch.” Someone has called this act of David fetching grace. Don’t you love that? It reminds me of Jesus’ word to his followers: “You did not choose me, but I chose you …”

When Mephibosheth was presented to David, the king said, “Don’t be afraid, for I will surely show you kindness for the sake of your father. And I will restore the land that belongs to your family.” The story ends with Mephibosheth living in Jerusalem, eating at the King’s table.

And this is the place in this Old Testament story where Jesus shows up. As I consider Mephibosheth coming to live with David, I realize there is no miraculous healing. David doesn’t hire great doctors to fix him up. Mephibosheth comes as he is and as he is he is welcome at the table of the King.

Welcomed, not as a servant but as a friend.

In that scene, Jesus says to us also, “You don’t have to be different than you are to sit at the table and be part of the things I have for you. We are not all sitting around waiting for you to be better, different, healed. You have been chosen as you are, loved as you are.”

Transformation will come in the nourishing, of course (we are Methodists, after all, who believe sanctification is the other half of salvation). But transformation begins with an invitation to the table. Come as you are.

And right here, right now, I want to thank Jesus for that word. Isn’t that exactly what he did for me? For you? After the resurrection, he showed up to this woman who would have been an outcast in her world, once crippled by demons. He showed up to her and her circle, and to those guys walking down a road toward their house in Emmaus. The story says, “He was known in the breaking of the bread.” He was known at the table, in the conversation, in the moment.

Jesus came bearing the inestimable power of friendship. He comes bearing a rare kindness, for the sake of the Father, saying things like, ““Greater love has no one than this, that one lay down his life for his friends. ”“I no longer call you servants, I call you friends.” “You didn’t choose me, but I chose you.”

Friendship is the gift of the Kingdom. Jesus came to us as friend, and invites us to befriend people in authentic ways. This is how the gospel gets rooted. It gets rooted in the soil of community and it bears the fruit of friendship.

(This story is also part of the Encounter Jesus study, available at seedbed.com)