How I almost quit (and why you shouldn’t) 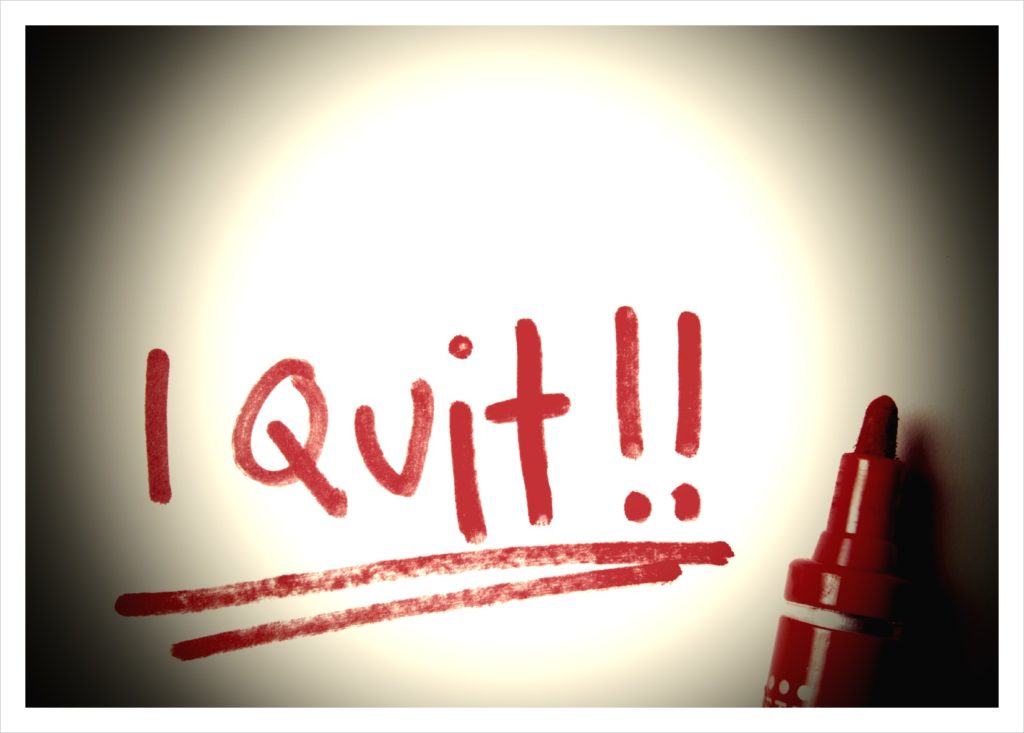 Today, I quit being a Christian.

That was the leading line in a Miami Herald article by Annie Rice, author of The Vampire Chronicles. Annie was a self-proclaimed atheist who eventually returned to the Church.* Now she has decided Jesus is okay but the Church is not. In the article, Annie says, “I remain committed to Christ as always, but not to being ‘Christian’ or to being part of Christianity. It’s simply impossible for me to ‘belong’ to this quarrelsome, hostile, disputatious and deservedly infamous group. For ten years, I’ve tried. I’ve failed. I’m an outsider. My conscience will allow nothing else.”

I assume there are a world of people like out there like Annie. You may be among them — one of those people who likes Jesus but the church … not so much. If you are attached to my denomination that may be compounded by a sense of frustration that borders on hopeless.

Maybe you’ve decided you have no room in your life for that kind of hassle. It is easier to stay home and be angry than to contend with a broken system. I get that. If Jesus weren’t real, I’d find easier ways to spend my Sunday mornings and my work life. But let me share why I think the Church — and your church — is worth the hassle and your allegiance.

It is simple, really: Jesus is head of the Church. He is the founding pastor. He cast a vision for it after his resurrection, then set it in motion at his ascension. In fact, a lot of the New Testament is Paul working out his theology of Church in the context of first-generation churches. They are, he concludes, in some mysterious but real way the body of Christ on earth.

Let me say that again: We who follow Jesus are in some mysterious but real way the body of Christ on earth.

How do you quit that, exactly?  I’m not sure you can, and still call yourself a follower of Jesus. This isn’t about a particular tribe or flavor. What I’m talking about here is the life of Christ on earth, signified by the community he has called together.

What do we do, if we don’t like what we’ve got, but don’t have permission to quit?

1. Repent for your own short-sightedness. This is where God has had me in the time since our United Methodist General Conference in 2016. For years, I’d been in an internal “quit” mode where the UMC is concerned. A long time ago, I lost my patience for what we have and was looking for an exit door.

I wanted to quit.

I expected to find a “door out” at last year’s General Conference but then something happened, something no one expected. It seems as if God had decided to do a new thing. And I didn’t see it coming.

More explicitly, I didn’t believe God was big enough to change the tide of a denomination … or that he cared. I write that now with such heavy contrition. I under-estimated His capacity to make a way in the desert, to cut streams through the wasteland. God moved in a surprising, redemptive way last year in our denomination and I almost missed him. That is cause for repentance, for course correction, for humility in the face of all I may not have eyes to see. I don’t know where God is taking us, but He has given me a new heart for the 11 million people called Methodist, and I want to be respond to that gift faithfully.

2. Pray and live prophetically for the future of the Church. Prophets learn to hear the voice of God, to see where he is working. Then they put that into language that edifies the body of Christ and instructs the surrounding culture. The Church in the U.S. is starving for people willing to pray and speak boldly into both church and culture. We starve for prophets unafraid of being a peculiar people — holy, chosen, strange in the sense of being … well …

Strange. Different. A light in the darkness.

I’m talking about people with faith enough to say, “I see something beyond the obvious here, something that ought to change your sense of reality.” We need prophets who keep us focused on the big picture. We need folks who understand the ramifications of our leadership choices.

3. Actively practice your gifts. Whatever your gift, practice it (note: complaining is not a valid spiritual gift). Become a valuable contributor to God’s work on earth. This is how the Kingdom comes. Besides, if you don’t lead, who will?

4. Don’t quit. As we cultivate the gift of prophecy, we begin to see with clarity that God is indeed working. It may not be obvious to the naked eye but He has not given up on this world, nor has he given up on the Church.

Jesus has not quit. Not you. Not the Church. Not the world.

Which is to say that the world is not the problem. The world is the prize.

*Church with a capital “C” refers to the Church in general, wherever it exists around the world. “Church” with a small “c” refers to a particular church, like your Baptist church or my Methodist one.