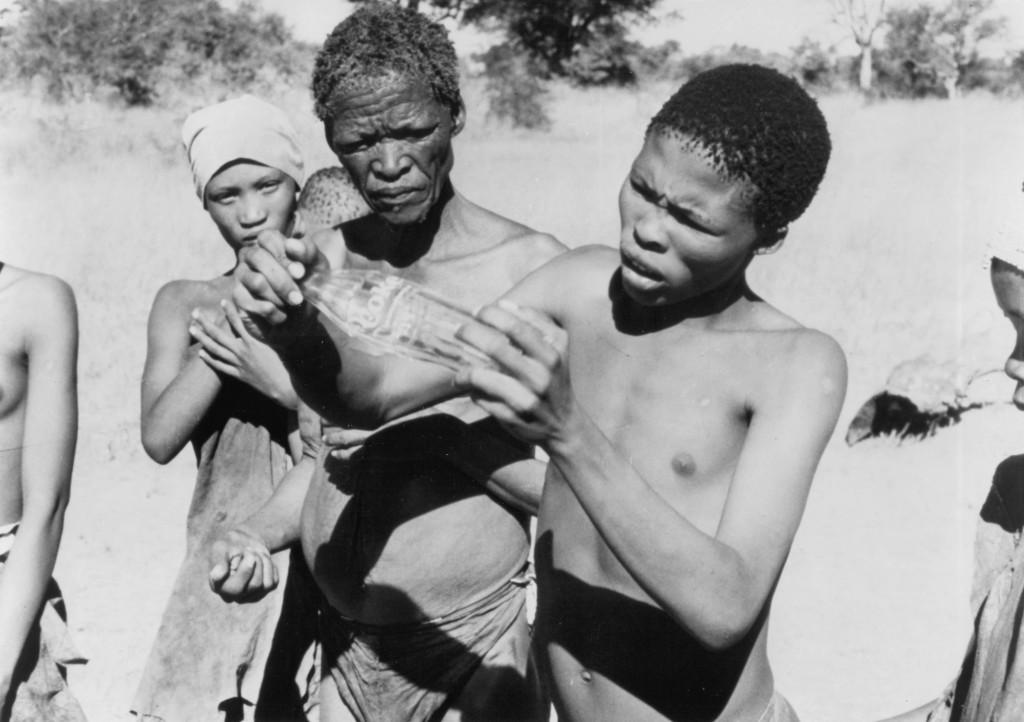 The Gods Must Be Crazy is the story of a remote African tribal village that finds a Coke bottle in the jungle. It seems to have fallen from the sky, though in fact it was dropped from an airplane. These tribal people have never seen anything like this before. They aren’t sure what its purpose is. They find uses for it — to pound things and crush melons and even make music.

This foreign thing makes life interesting. Separated from its purpose, it also creates jealousies and envy and even anger — something this village hadn’t experienced before. There isn’t enough of the bottle to go around. Everyone has their own reason for needing it and the bottle becomes a reason for them to compete rather than being in partnership. At the end of a day people grabbing the bottle from each other and using it get their needs met at the expense of others in the group, they all sit around a fire, and the narrator says, “A strange feeling of shame had come over the family and they were very quiet.”

This story is such a great example of how human design works. When a thing is separated from its purpose — when our bodies are separated from our spirits — we lose sight of the point of them and can even begin to misuse them for things other than their intended purpose. In doing so, we discover our own selfishness, much like Adam and Eve.

Before the fall, before we lost sight of our created design, God created partnership. The first creation story in Genesis describes the work of man and woman together.

“God blessed them,” Genesis 1:28-29 states, “And God said to them, ‘Be fruitful and multiply and fill the earth and subdue it.’” This was the work of the first people, to steward the rest of creation in partnership with one another.  If the first creation story emphasizes partnership, the second creation story in Genesis emphasizes the unity of man and woman.

Genesis 2 paints a beautiful image of mutual servanthood: the woman comes out of the man to give him companionship and the man comes out of his home to give her companionship. There’s this very deep sense of interrelatedness. There is a clear sense from the creation story of God’s intentions for men and women: to populate the earth and to give us to each other for companionship.

Men and women are cut from the same cloth, as it were. It is the combination of the two — male and female — that reflects the image of God.

Then comes the Fall. Genesis, chapter three, turns a partnership of equals into an antagonistic relationship. Adam and Eve, both condemned by their own failings, will experience suffering in this life. Adam will fight against the ground as he works it for his existence. Eve will no longer have a partnership with Adam; he will rule over her.

No one told most of us that so much of our pain comes from this break with our created design.

If that were the whole story, it would be a deep discouragement, but it isn’t. Sin might have been what broke us, but Jesus is putting us back together. Jesus, a sacrifice for sin, hung on a cross to become the first of a new kind of humanity. Jesus is restoring us to our created design.

This is what makes Easter worth the celebration. It is the holy day for new beginnings. It tells us that no matter what we’ve done, no matter how far from God we’ve wandered, not matter how much water has gone under that bridge, we can begin again. This is the promise of the cross. It is that there is no mistake so far out there that it can’t be made right. There is no wound so deep that it can’t be healed.

God can make all things new. As long as there is an empty tomb, it is never too late.