Blessed are the offensive, for they are like Jesus. 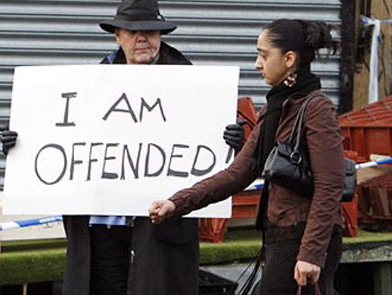 Maybe Jesus really is the One.  If he is, John the Baptist needs to know.

Sitting in prison (see Luke 7), it became John’s driving question.  Is this guy the one?  Either he is and is worth dying for, or he is a lunatic in which case we need to keep looking. Maybe find someone who ticks off fewer people.  John sends a few of his students to Jesus to ask the question.  Before anyone gets further down the road, they need fresh assurances.

Those disciples of John find Jesus and ask him who exactly he is and he says, “You tell John this. You tell him the blind see, the lame walk, people are hearing good news about the Kingdom of God for a change, and it is downright scandalous. And God bless the ones who are not offended by that.”

I love Jesus for that response. There he was, standing in the middle of a marketplace healing people and talking to people and loving people. And the whole time, he gets it that healing and preaching and doing the work of the Kingdom is probably offending more people than it is attracting. Jesus gets the irrationality of that. He gets the danger of it. Jesus gets the weirdness of it. Of how easy it is to heal someone and offend someone in the same breath. Maybe even the same person.

Jesus gets it that in this life, there will be offense taken and hot air blown and houses battered. There will be battles fought in spiritual places and mean spirits coming after us, who plan to huff and puff and blow us down. You’d better have a strong foundation, Jesus says. You’d better make sure you dig down deep and build your house on the rock. Otherwise, you’ll be blown away by all those offended spirits.

Blessed is the one who is not offended by that. The odd one. The rare one. The crazy one.

And I want to thank Jesus for all the ways he so beautifully speaks directly into my life, just by the way he lived his. I want to thank him for all the things he gives me permission to feel and say and live. Thank you, Jesus, for telling me before I needed to know it that sometimes I will offend people just like you did. And that it doesn’t necessarily mean I’m offensive … at least not every time. It might simply mean that — like you — I unlatched a Kingdom gate when someone wasn’t ready to walk through it.

Blessed is the one who is not offended by me.

Blessed is Jesus. What a friend.