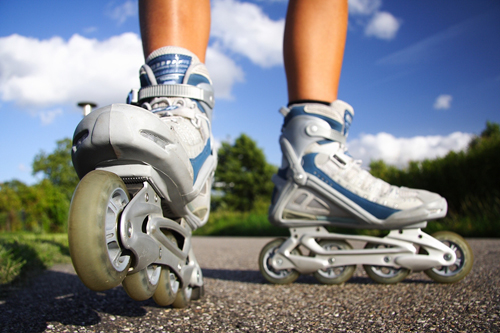 I skate. Or at least, I own some skates and when I get an hour on a weekend or Friday morning, I find some flat asphalt and roll around. I took up skating a few years ago because the gym gets old after a while and my area isn’t bike-friendly. Here’s a bit of skater trivia: 1% of all skaters in the U.S. are older than fifty. I am the one percent. Walking doesn’t do it for me like skating does. And skating can teach a person a lot about life, especially when one’s health is determined by one’s ability to dodge gum balls.

Here are a few lessons I’ve learned on eight wheels:

1. Slowing down takes different muscles than going fast, but just as many. On skates, slowing down is actually harder than speeding up. It takes almost no distance to get the speed up but it takes a lot of space and effort to slow down (at least for me it does). That’s also true in life or at least in my life. It is much easier to keep increasing my speed, and much harder to figure out how to slow to a saner pace. Sometimes we need to slow down so we can exercise a different set of muscles, just for the sake of keeping those muscles limber and in practice. Maybe this is why God calls us to a Sabbath every week (also this and this)?

2. Slowing down is important for sanity’s sake; sometimes, it is critical. When the landscape is littered with storm damage, going slower is how we keep from hurting ourselves or someone else. Grieving requires a slower pace (we so rarely understand that grief is an illness that requires recovery and rest, like any other wound). Increased stress requires a slower pace. Being able to judge the path and move accordingly is a test of one’s wisdom.

3. Staying on our feet when we stumble is good. Staying on our feet graciously is even better. I’ve noticed over my year or so of skating that I’m better at staying on my feet when I wobble than I was when I first started. Still, it is not pretty when a skater almost falls. It doesn’t just stress the person who stumbles; it stresses the people watching. In much the same way, it is one thing to negotiate a crisis on the job or in a family relationship and somehow come through the other side without killing anyone. It is another thing entirely to negotiate that crisis in such a way that it raises everyone up to a higher level. Learning to move through situations with such grace that others can enjoy my presence and not be stressed by it is a skill worth mastering.

4. It is the big things that spook us but the small things that get us. Storms shake every loose gum ball from every tree in my path (when I’m skating on the riverwalk) … and countless twigs, a few big limbs, and every spare leaf. That path was an obstacle course. On a good day, my main concern on that path is two streets I have to cross along the way. Those street crossings are always a source of anxiety. I hate having to skate over curbs. It takes everything I’ve got to make it from one side of the road to the other without falling.

But here’s the thing: curbs are obvious hazards and I know to take them delicately. What is more likely to get me is not the curb I can see but the gum ball I miss seeing. In other words, it is the little things that throw us off. As I learn to pay attention to the small things — expressing gratitude often and creatively, following through on promises, learning to listen well — I notice that the big things aren’t nearly so scary.

5. People are inspired by risk-takers. In general, people like old women on skates. I get a lot of smiles and thumbs-up. I’m a rock star with kids. People are inspired by someone who tries something different. I hope it gives them joy to see someone enjoying life. Most people need something external to themselves to remind them that until we die, we are charged with living life fully. This life is a gift meant to be enjoyed, not just endured.

6. There is a big difference between commitment and involvement. Eight wheels is a commitment. Unlike biking, I can’t stop and walk when I skate. I can’t steady myself before rolling on. When I put those skates on, I’ve committed to a mode of travel that doesn’t change until I take them off. It is something like the difference between the the chicken and the pig in a breakfast meal. Chickens are involved; pigs are committed. Likewise, I believe we make the greatest impact in those places where we fully commit. People respect those who let their “yes” be “yes,” and they lose trust in those who don’t follow through consistently. As a pastor, it is always more difficult to hear the criticism of someone walking out the door; I have much more respect for the advice of one who is invested for the long haul. It doesn’t mean there won’t be skinned knees along the way, but that we’ll help each other up and get rolling again.

Because life is too short to let a few falls stop us from this grand adventure.