Stay in it (part two) 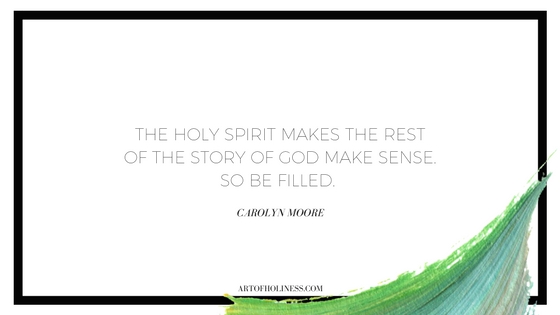 I’ve been thinking about how Luke used Elizabeth to change Mary’s perspective, so take five minutes and think about it with me.

When the angel visited Mary and told her she was going to have a baby, that had to be a lonely and confusing moment. She didn’t exactly have a decision to make but how she would receive this, and how she would live into it must’ve been baffling. She’d have to choose how she would live with what she was given, and this was a girl in her teen years without much experience to draw on.

So here’s what Luke does with this story. Before he ever gets to the story of Mary and the angel, he tells the story of Elizabeth, a relative of Mary’s with a little more life experience who also gets pregnant. Her pregnancy is also somewhat miraculous, coming years after she should be able to conceive. Elizabeth is surprised by her news, too, but excited. Relieved, even.

Luke tells Elizabeth’s story of getting pregnant, then drops in Mary’s conversation with the angel and in that part of the story Mary is obviously confused — “troubled” is how Luke describes her. She’s asking questions, trying to figure out how this works. And somewhere in the conversation, the angel brings up Elizabeth, that Elizabeth is pregnant, too, and that she’s going to have a child she didn’t expect to have, either. The next sentence has Mary relieved and the sentence after that has her going to visit Elizabeth. When she gets there, this thing happens between them. It is like deep calling to deep. Elizabeth’s baby — six months old inside the womb — leaps at the presence of Mary’s baby. And in the moment, Elizabeth is filled with the Holy Spirit (Luke 1:41).

Now they are all standing there together steeping this profound knowing. If you count the Holy Spirit, there are five of them in this circle: the two little guys in the womb, the two women, and the Holy Spirit. And this is when Elizabeth draws on a prophetic knowing. She doesn’t soothe Mary’s emotional state or offer up a few hopeful platitudes. Instead, she speaks spiritually, deeply, prophetically over Mary, helping her reinterpret her experience. “Blessed is she who has believed that the Lord would fulfill his promises to her” (Luke 1:45). Elizabeth speaks that word over a very confused young woman and the very next sentence has Mary singing praise, like it all makes sense to her now. Her song and this scene end with this: “Mary stayed with Elizabeth for about three months and then returned home” (Luke 1:56).

Elizabeth’s prophetic voice, the profound knowing of John and Jesus, and the presence of the Holy Spirit all combine to create an atmosphere ripe for transformation. So here’s my question: What if Luke wrapped Elizabeth’ story around Mary’s story to show us how spiritual conversation and close community brought Mary’s heart into the call of God? Think about it: The angel is the one who gave her the news, but it was another human with whom she could identify who made it good news. And it was the Holy Spirit who ignited that conversation and gave power and binding to all those relationships.

This is the bond that held together a woman’s call and gave Mary courage to birth into the world its Messiah, Jesus of Nazareth, with disciples who followed him in messy, faithful, passionate style. When Mary found the combination of circumstances that allowed her to step into God’s purposes with passion, she chose to stay in it, to steep in it. And what Mary did at the beginning of Luke is exactly what Jesus prescribed for his followers at the end of Luke. In Luke 24:49, his followers are told by the resurrected Christ to “stay in the city” until they’ve been clothed with power from on high. The word stay draws a straight line from chapter 1 to chapter 24.

Here’s the secret: It is the staying power of the Holy Spirit.

“Stay here,” the disciples are told, “until you receive power,” because without that power you will fall headlong into disappointment. And so they stayed. They stayed while Jesus ascended and the Holy Spirit descended, and then they were shot out into the world to prepare it for the second coming of Christ, not to help people escape from the world but to give them a transformed worldview rooted in the phenomenon of Jesus. Without the wind of the Spirit at their backs, those first followers of Jesus would not have had the momentum to share the good news with a waiting world.

The Holy Spirit makes the rest of the story of God make sense. He makes my story make sense. He reveals truth and makes it accessible to those who pursue it. He ignites the spiritual fires. He gives the process of spiritual formation its power. And I’m convinced that without the power of the Holy Spirit, any attempt at ministry is frustrating at best and possibly even detrimental to the cause of the Kingdom.

So be filled. Now. Here. Ask, Luke tells us, and believe when you stand up from this place that God has filled you with his Holy Spirit because God wants this for you. And then walk in that authority and do the work to which you’re called so we can all go home.