Let’s take the world by force 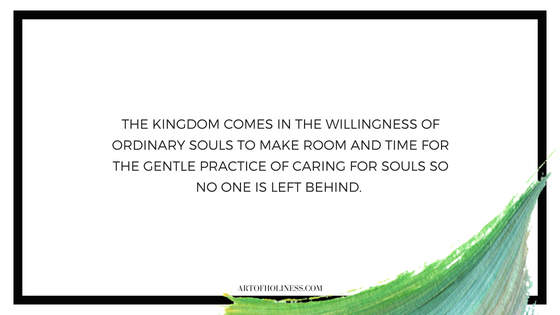 Jesus never moves far from the topic of the Kingdom of God.  He is always trying to get us to see it, grasp it, embrace it.  It is like a seed, like soil, like leaven, like something valuable buried in a field. Something ordinary, sometimes hidden, that possesses an unexpected strength.

The Greek word used here is biazetai.  Depending on how you use it in a sentence, it can have either of the meanings noted above (“suffering violence” or “forcefully advancing”), though they are markedly different.

So which is it?

Which is it? Is it suffering violence or forcefully advancing? 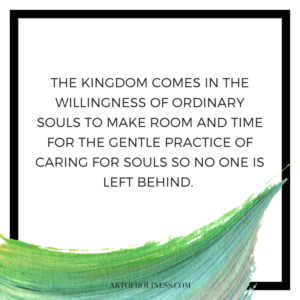 But the Kingdom never quits coming. It never gives up, never gives in, never lets go, never loses sight of the work. If John (and we) wants to understand how the Kingdom of God forcefully advances, tell him this: The blind see, the lame walk, the dead are raised, the possessed are set free and the good news is preached to the poor.

That’s why John was asking questions. Because this isn’t what he expected. He (and we) want force to look like force. We want Jesus to kick butts and take names. But instead, God’s Kingdom forcefully advancing looks more like average people talking over coffee, telling stories of transformation. “This is how Jesus changed my life.”

It looks like someone taking a box of food to single mom simply for the privilege of praying with her for better days. It looks like groups of people quietly gathering in buildings to bind up broken hearts and proclaim freedom to captives. It is people praying it forward, praying hopefully toward the day when there is no more pain, no more tears, no more racism, no more adultery, murder, divorce, anger, unrighteous judgment.

This is how the Kingdom comes. It comes in the willingness of ordinary souls to make room and time for the gentle practice of caring for souls so no one is left behind. It is seeds, leaven, oil, a cup of water, time, patience, stories.

That’s the force of it and for a lot of people that’s an offense.  It simply isn’t what we expect.

But that, Jesus seems to say, is how it is done.

* Some years ago, I heard Dr. Tennent, president of Asbury Theological Seminary, preach on this verse and his remarks have stayed with me.