The Parable of the Church Planter (or, “Why I’ve Been Angry With God”)

There’s an old story about a man who is asked by God to push against a large rock. God tells him this is important work, this rock-pushing. He asks the man to give it everything he’s got. The guy obliges. In fact, he takes up this call excitedly. “ 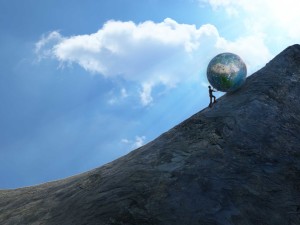 I am going to be a great rock-mover for the Lord!” He begins the work early the next morning. He pushes. He shoves. He leans into it. He gives it everything he’s got.

The rock doesn’t budge. Not even a little.

This becomes the man’s daily grind. Every day, he goes out to this rock (that he can’t possibly be very fond of by now) and he pushes against it from morning till night. He tries every angle. He surveys the options. He gives it all his strength and all his time and all his concern and all his best ideas.

And the rock doesn’t move. Not a hair.

Some time into this venture (years, possibly), the guy is wildly frustrated. Calloused. Patience worn thin. Very nearly burned out by all this rock-pushing. He turns to God in his frustration and says, “What the heck was this about? I have done exactly as you asked. I’ve done everything I know how to do to get this rock to move. I was passionate about rock-moving. I thought you had a plan for me. I thought you’d be there for me. But all these years and I have gotten absolutely nowhere. Why would you ask me to do this?”

To which God replied, “Oh, but I never asked you to move the rock. I only asked you to push against it. And you’ve been incredibly faithful to the task. Well done.”

“Why in the world would you ask me to push against a stone you knew would never move?”

“The project was never about the stone,” God replied. “The project was about obedience.  Sanctification. You’ve spent years at this task, and now look at you! Well-toned muscles. Tough skin. Seasoned passion. What a great return on this investment of time!”

At this revelation, the very core of the man was shifted to some new place.

God went on. “Stones moved here or there don’t amount to much in the Kingdom of God. But people who get moved by stones?  Now, that is cause for rejoicing in the Kingdom.”

And oh, what dreams I had. What ambition. I was going to move mountains. And now to find out that the mountain was designed to move me.

He who has ears to hear, let him hear.