Thoughts on the way to Annual Conference 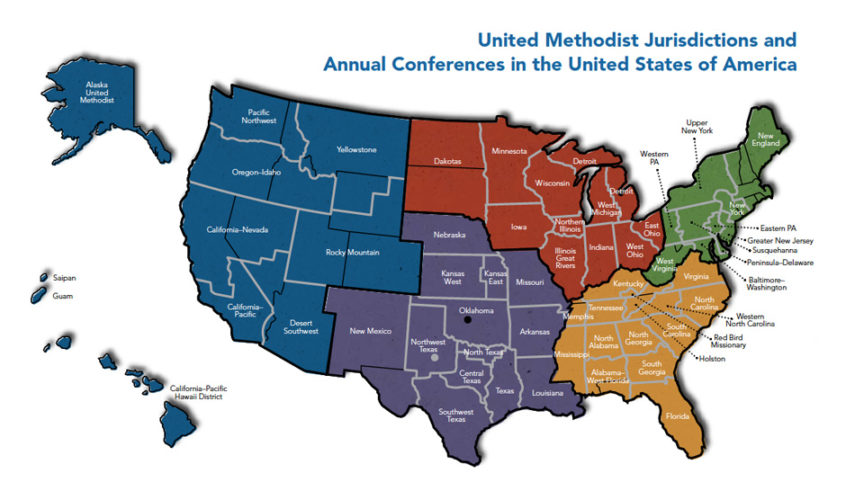 I practice ministry as a theologically conservative and socially engaged Methodist. I preach that Jesus Christ is the Lord of the universe — the way, the truth and the life, the exclusive path to God our Father. I believe these are the headwaters of orthodoxy and that unless we Methodists agree on that bedrock truth, subsequent conversations about the nature of salvation or holiness — or denominational unity, for that matter — are pointless. To proclaim the Kingdom is to proclaim the Lordship of Jesus Christ.

Wesleyan theology gave me a framework for loving God and others that is life-giving. Being settled in that theology has allowed me to practice this faith joyfully among the people God has sent into my spiritual care. Denominationally, however, holding a socially engaged, theologically conservative line inside the UMC has been a strain. Even if I am committed to grace-infused, love-filled ministry alongside the poor, the oppressed, the marginalized, my position still seems intolerant or unkind to some. To maintain these doctrines in the face of others’ suffering draws up arguments about what love is and what justice means. I sense the tension. No genuinely loving person could avoid it. But I have settled in my own heart how loving God and loving others fits together in a theologically orthodox construct.

I remember talking years ago to someone who was once married to a rather grating celebrity, a person who created a lot of controversy. Over the years she’d heard all the disparaging comments and had become used to the kind of response I gave when she told me who she’d once been married to. I flinched. She’d obviously seen that flinch before because she was ready for it. She said, “I am not asking you to understand why I married him … but he was my husband, and I loved him.”

I was humbled by that. You don’t know another person’s story. You never know why people dedicate themselves as they do to their positions, long past what others would tolerate. In the case of conflicts within the UMC, we don’t know all there is to know about how any of us comes at social issues and Wesleyan theology. While we are called to listen and respect one another, we are not required to be without our own deeply held convictions.

This much I know: I (like all my United Methodist colleagues) have publicly and formally committed to preach and maintain a specific set of stated doctrines. Methodism is not an institutional brand, like McDonald’s (no offense to McDonald’s, which actually does a much better job of providing a consistent product). We are not defined by a logo or tagline. We are defined by our theological task. In other words, I don’t get to decide what it means to be Methodist. That has already been decided, and my part as an ordained clergy person is to embrace and live it out. Some have decided that for them, this isn’t possible any more; yet, they remain in our covenantal tribe. This is the rub.

Early on in this denominational debate, it was considered treasonous to express a hope for creative separation along theological lines. Some of us have privately expressed that hope for years. We believe that given our circumstances, it holds integrity to set folks free to explore their beliefs without angrily imposing undue financial burdens on those who simply cannot in good conscience remain in the UMC as it stands — conflicted, chaotic, theologically disconnected.

Today, we not only must take that hope seriously but must actively work toward it. At this point, to angrily persist in a “one church” spirit that is in no way loving or respectful of irreconcilable beliefs seems the least loving option of all. It is certainly the least faithful posture toward a free-will theology that is invitational at its core.

That said, these facts ought to guide every influential conversation between now and General Conference 2020:

I want to suggest that respecting these distinct positions as both realities (these camps exist) and radically distinct ecclesiologies (these camps are not compatible) is the only position that holds integrity at this point. Allowing these three positions space and definition to be lived out fully — with an open hand, under the gaze of God, without punitive punishment — is our only way beyond this impasse. It means separation, or division, or multiplication; call it what you will. But when all is said and done it means grieving the loss of the United Methodist Church as we currently know it. It means holding people with an open hand, which means trusting God more than ever before.

Ultimately, it means freeing the adherents of these radically different, theologically irreconcilable camps of Methodism to turn their backs on the denominational battlefield, to beat their verbal swords into ploughshares, TO GO THEIR SEPARATE WAYS IN PEACE, to return to the harvest fields of local and global ministry –and as the Spirit leads — to form new combinations and connections with theologically compatible partners.

Friends, as you pray toward, vote toward and live toward General Conference 2020, please give these opposing positions respect enough to set them free to prove themselves.

Allow me to return to my own confession as an encouragement to you: I am committed to preaching and maintaining a socially engaged, theologically conservative, spiritually vibrant Methodism. This is where my heart is. When I stand in this place — compassionate toward people and committed to orthodoxy — my internals match my externals. I wouldn’t want anything less for anyone, whether they agree or disagree with me. Any other option smacks of the politics of control. Surely we can do better than that.

My friends, I encourage you to find that place for yourself where your internals match your externals so you can preach the Word with passion and maintain the doctrines you’ve promised before God to maintain. It is time to put an end to these many years of painful strife within the UMC. It is time to part. Let’s bless each other to do so.