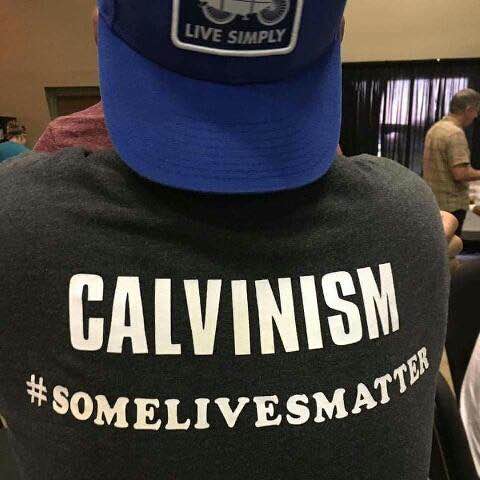 I have great respect for many colleagues in ministry who espouse a reformed or Calvinist view of the world. That said, it should be no surprise to those who read and listen to me regularly that I am enthusiastically and unapologetically Arminian (really interested? Read this book). I am far too deeply committed to the notion of God’s pure love exercised in his gift of human free will to appreciate most of what reformed theologians teach us. I can manage about two  and a half letters of the TULIP; the rest of it does not convince me.

I suspect that at least some of our theological differences are just a matter of how our brains work but there are concepts that cross a line into dangerous territory. Here are three Calvinist ideas I’ve heard voiced in real conversations that cause real damage when spoken into a secular culture:

Misconception #1: God has my days numbered and nothing I do can change that. This line was shared (verbatim) while someone I love was animatedly sharing his participation in some fun but risky behavior. He said, “Listen, I know where I’m going when I die and God knows exactly when that is going to happen and nothing I do can change that.” His point was that since God has already ordained the day of his death, his choices have no power to change his future.

Calvin not only taught that God’s grace is irresistible but that a true believer in Christ cannot possibly fall from grace. And in fact, he took this idea a step further. He believed every detail happens according to the will of God, that even evil people are operating under God’s power so that no matter what a person does, God has caused it.

Maybe on my weak days, I wish this were true. I sometimes wish God would just override my will. I can’t tell you the number of times I’ve been with people who struggle to believe; in those moments I’d give anything if God would just save them from themselves.

Make them believe, Jesus! Because they’re killing me!

But that isn’t how it works. People come to Christ every day and every day people resist the grace of God. Not only that, but every day people make horrible choices against the will of God that limit the length or joy of their lives.

Our behavior matters. If I smoke two packs of cigarettes  a day, it will affect the length and joy of my life. To persist in such behavior isn’t God’s will, and our behavior matters to God. As Moses said to the Israelites, we have two choices before us — blessings and curses, life and death. “Choose life, that you might live.”

Misconception #2: Everything happens for a reason and all reasons are ordained by God (even the evil ones). I most recently heard this one at the funeral of a young adult who overdosed. How such a hollow statement could have provided comfort to a family dealing with such a tragedy is beyond me. Is even an overdose ordained by God? I can’t imagine the thought of having to endure such a tragedy believing that God had done this to my loved one … or at least blessed it.

Paul’s word to the Romans was that God can work all things together for good for those who love him and are called according to his purpose. There is a ton of solid theology in that one line; it assures me that God can make good out of even my worst mistakes. What it doesn’t tell me is that God causes my mistakes. He can work redemption into a circumstance without causing it.

The fact of God’s sovereignty does not have to mean that God has made toys to play with. People are not puppets. To the contrary, he has made free humans with heads, hearts and wills, “just a little lower than the angels.” I can have  tremendous trust in who God is, in his great love for us and in his power to redeem anything without having to believe that he causes even my worst mistakes and sins.

Misconception #3: Jesus died for the ones he came to save, but not for everyone.
This is how many people deal with the fact that many in the world have never heard and will never hear the name of Jesus. It is because Jesus didn’t die for them. The “L” in TULIP means God’s atonement is limited. A Calvinist would say, “It is not my salvation to get and it is not my salvation to lose. It is Christ’s salvation of me.”

An Arminian would agree. God’s salvation is his gift to us, and nothing we do can generate it. But everyone is offered the gift. Every person on this earth has both the right and the opportunity to have their chains broken, their guilt removed and their value restored. There is no one beyond the reach of his mercy. To think otherwise is to judge someone before Christ himself has had the opportunity to do so.

Salvation is a free gift for everyone. Not everyone will accept that gift, but everyone is offered it. Otherwise, what was the cross for?

This is the strength of His grace. It is that willingness of God to be there no matter what, so that when we awaken to him, he will be there. Grace is that strong willingness of God to bear our stories of rejection and inadequacy, of dark nights and angry days, even our own stories of sin and shame. God’s grace is strong enough to bear the pain we’ve caused others as well as the pain of others we feel. God is there through all of it. That is what it means to be sovereign. God has been there the whole time, watching and in his strength, waiting.