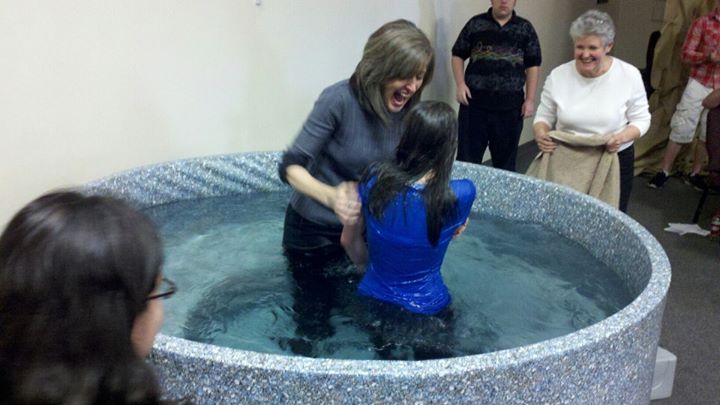 It seems to come in waves.  Some weeks (months, even), I have no conversations at all about women in ministry or church leadership.  Other weeks, it is a theme. Since it has now surfaced three times this week (and it is just Wednesday!), I thought I’d post something I’ve shared in other forums before.

When the question is asked of me (and it often is) about how I have arrived at my beliefs about women in ministry, this is how I respond:

1. Women were last at the cross, first at the tomb and first to be told to “go and tell.”

2. Jesus himself chose a woman to be the first preacher of the gospel. She is the one Jesus met in the garden on the day of his resurrection, and she’s the one to whom he said, “Go and tell the others …” And they were men she was telling. I believe my ministry is in that spirit. I have been called to go and tell.

3. As for the two passages in Paul’s letters to the Corinthians and Timothy, I do believe they must be taken in within the context of the whole Bible. They must be read through the lens of Deborah’s story, and through the lens of Mary’s charge, and through the lens of Galatians 3:28 (“there is neither Jew nor Greek, slave nor free, male nor female”). I consider also the women who traveled with Jesus and the women (Priscilla and Junia) who labored in the gospel in the first century. God has surely not called all women into vocational ministry (nor has he called all men into vocational ministry), but he has surely called some. The Bible itself testifies to that point; that women were mentioned at all is a testament to the respect they were given. These verses must also be read through the lens of the creation story, which did NOT create hierarchies but fulfillment. Men and women fulfill each other. In some obvious ways we compliment, and in all ways we are in partnership.

The Bible must always be read within its historical context. Paul’s letters are not bound historically, but they are rooted historically. What we know about women in the first century is that they weren’t yet equipped to lead. They were largely uneducated. They had no experience in public gatherings. The Christian ethos gave them far more freedom than they’d had before and Paul’s instructions agreed with that. He allowed them to learn. He encouraged them to ask questions. In his letters, he honored a number of women who were laboring in the gospel. I don’t believe it was Paul’s intention to create a theology of women (otherwise, he would have given many more lines to the subject), but to manage a rapidly growing movement rooted in a particular place and time. Perhaps a more universal truth to arise from his comments would be, “In all you do, be humble, recognizing your limits.”

4. In this regard, Jesus’ words carry more weight. His commands and charges at his resurrection are all gender-neutral. Go make disciples. You will be my witness. Take up your cross and follow me. I can’t imagine God meant for only half the population to fulfill these commands and commissions.

5. Finally, just from my own place as a pastor, I deeply resonate with the exchange between Jesus and John’s disciples. When John (the Baptist) was in prison and wanted to make sure he was on the right track in his belief about Jesus, he sent his disciples to ask, “Are you the one?” Jesus said, “Go and tell John what you hear and see: the blind receive their sight and the lame walk, lepers are cleansed and the deaf hear, and the dead are raised up, and the poor have good news preached to them. And blessed is the one who is not offended by me.” In other words, tell John I’m bearing fruit, and fruit is how we are judged in the Kingdom of God.

When I stand before the throne, I intend to bring the fruitfulness of my ministry with me and I have absolute confidence I will be judged by my fruit, not my gender.

This is what I hope for among those who serve Christ with me at Mosaic: I want to serve with folks who can fully appreciate the fruit we are bearing together without taking offense at my part in it. If someone can’t quite feel comfortable bearing fruit within a ministry led by a woman, I encourage them to find a place where they can bear fruit without that concern.

To bear no fruit is a dangerous thing. Whatever else we believe or don’t, I’m confident that our fruitfulness is what best honors the Christ we serve.

RESOURCES TO HELP YOU THINK ABOUT THIS:

This seedbed page lists a number of blogs and resources on topics related to women, ministry and biblical roles (some of which were written by me):

For more a more in-depth look, I can’t do better than what Ben Witherington has already published on the matter. Ben is a professor at Asbury who has written extensively on this topic. You’ll find great stuff from him here:

Why Arguments against Women in Ministry Aren’t Biblical