You get what you look for (a primer on spiritual signs) 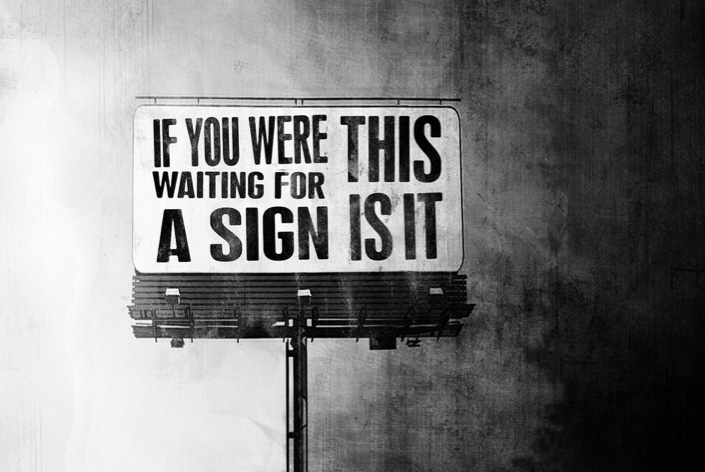 The gate of heaven is everywhere. – Thomas Merton

The story of God in the book of Mark ends with a one-liner that sums up the entire the book of Acts:  “They went out and preached everywhere, while the Lord worked with them and confirmed the message by accompanying signs” (Mk 16:20).

This in a nutshell is the story of the first-century church. People who believed in Jesus talked about him while Jesus worked on the people who believed, and God confirmed what was happening with signs that signaled the presence and direction in which he was headed.

It is a glorious dance. Witness. Sanctification. Signs. This is the pattern of productive discipleship.

What I learn from our first-century ancestors is that signs put us into the flow of God’s plan. The signs were not the message. They signaled the presence and direction of God and pointed people toward Kingdom work. They set followers on a course to do the will of the Father.

Signs are not meant to tickle our spiritual fancy. They are not a conjuring up of God or even a way to change reality (though our openness to them certainly affects our direction). Signs show up where God is already at work. Their purpose is to extend faith, extend truth, or extend reach. As Henry Blackaby might say, signs are about looking for where God is at work so we can join him, about seeing past the temporal to something greater.

Are signs only for really spiritual people and messiahs? Not all all.

God shows things to people he loves and God loves us; therefore, he is likely to show us things so we will be encouraged to move more intentionally into the flow of his will. “Repent and believe, for the kingdom of God has come near,” Jesus said (Mk 1:15). “Do you have eyes but fail to see or ears but fail to hear?” (Mk 8:18)

In other words, if you are blind to signs of God’s presence, the problem is on the user-end of the equation. Signs of God’s in-breaking Kingdom are all around us, though most of us don’t bother developing the kind of eyes that see them. People who have no room for the supernatural in their lives may even be offended by the thought that God reveals himself in the world. But signs are not meant to offend and prophetic sight is not a fringe notion for the “weird ones.” It is central to the work of God. This is about getting a different way of looking at the world — a way that sees beyond the temporal into the eternal.

“It is not too difficult for you or beyond your reach,” Moses told the people of Israel (Dt 30:11-14). “It is not up in Heaven, so that you have to ask, ‘Who will ascend to Heaven and get it for us? Nor is it beyond the sea, so that you have to ask, ‘Who will cross the sea and get it and proclaim it to us to we may obey it?’ No,” Moses writes, “the word is very near you; it is in your mouth and in your heart.” Or as Jesus said (Luke 17:21), “The Kingdom of God is not something to go searching for. It is in your midst” (or within you, or among you).

In Luke, chapter nine, there is a line that grabs my imagination and stirs me to look for that gate. Jesus has just been talking with his followers about the connection between his glory and our faith, and now he is heading up a mountain to pray with Peter, James and John. As he is praying, the appearance of his face changes and his clothes become as bright as a flash of lightning. Two men, Moses and Elijah, appear in glorious splendor to talk with Jesus. They talk about his departure from this earth, among other things. Peter, James and John are sleepy but the story says that “when they became fully awake, they saw his glory” (Lk 9:32).

Do you spend a lot of time doing a lot of really good things that may not at all be related to your God-given purpose? Are you so busy that you can’t see the eternal for the clutter of the good? Perhaps the answer is in praying for eyes to see what God has placed right in front of you.

The gate of heaven is everywhere. Ours is to live as if that is true.